Last week, with the help of HIAS, I was able to interview three public figures in one day.  It was an exciting day, to say the least, adding invaluable insights and perspectives to this documentary and my personal education. 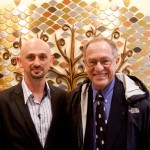 The first was the incredibly generous and knowledgeable Alan Dershowitz.  An expert on Civil Rights, Professor Dershowitz shared his knowledge and views on civil rights in pre- and post-Revolutionary Russia, as well as the late Soviet period during which he defended refuseniks using Soviet law to win acquittals for many of the persecuted.  How many other people in the world can tell a story about themselves, Anatoly Sharansky and Gorbachev getting into an elevator in Israel?

I was surprised (clearly my mistake for the underestimation) how familiar Mr. Dershowitz is 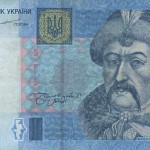 with the Menahem Mendel Beilis “blood libel” case of 1911.  Not only is he familiar with it but he has been in touch with Beilis’s descendants here in the U.S.  On the subject of Ukranian antisemitism, he quickly points out that it is (as far as he or I know), the only country to feature a known anti-Semite and mass murderer of Jews on their currency — pulling from his wallet a 5 Hryvnia note featuring Bogdan Khmelnitsky.  Considered a national hero of Ukraine, Khmelnitsky is responsible for the killing of as many as 20,000 Jews in his attempt to eradicate them from Ukraine.  This was just the beginning of our conversation.

Mr. Dershowitz’s observations were well informed and some quite thought-provoking.  One of the surprising perspectives he offered was that the revolution, as far as the egalitarian goals of many of the Jews involved, was destined to failure and that the participating Jews may have been deluding themselves to think otherwise.  This sounded radical to me at first, but given the historic context of antisemitism in the region, he may have a point.

I would have loved to talk to him all day, and maybe he would have been willing, if he didn’t have an interview with BBC immediately after, so I ended the interview by thanking him for his tireless efforts to help free Soviet Jews (refuseniks and asylum-seekers alike).