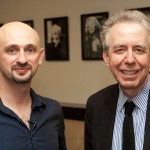 Yesterday, I sat down with Professor Jonathan Adelman to discuss the Russian Revolution — the Jewish participation in it and its effect on the formation of the state of Israel. In his studies and publications, such as his book, The Rise of Israel: A History of a Revolutionary State, Prof. Adelman has compiled extensive information on the subject, including the numbers of Jews involved in each of the revolution-era parties and their affiliations to Judaism vs. their assimilation and self-identification as cosmopolitans.  We drew heavily from his book, which is great reading for anyone interested in Israel’s genesis and survival compared to other revolutionary states such as Russia, China and even Iran.

Between his extensive knowledge of historic events and of individual histories (factual and anecdotal), I had a great time learning from and chatting with him.  I’m certain that the documentary will be richer for his participation.

Thanks to the Jewish Federation of Los Angeles, who brought Professor Adelman to LA and allowed me the opportunity to interview him and to the Acting Studios of Beverly Hills for the letting us film at their impressive space (right near the Federation!).