In the course of working on (indeed the impetus behind creating) this documentary, I have learned a great deal about my own history and that of the Jewish people of the former Russian Empire, about the hardships faced and successes earned.  The goal has always been to share this knowledge.  Two weeks ago, I had the opportunity to do just that.

Working with the organization BINA (a “Jewish TED for Los Angeles”), I had the privilege of presenting a talk titled “Don’t Call Me Russian | The History of a Nationality.”  It’s now available for streaming on the BINA website, and youtube, and I am pleased to share it here. 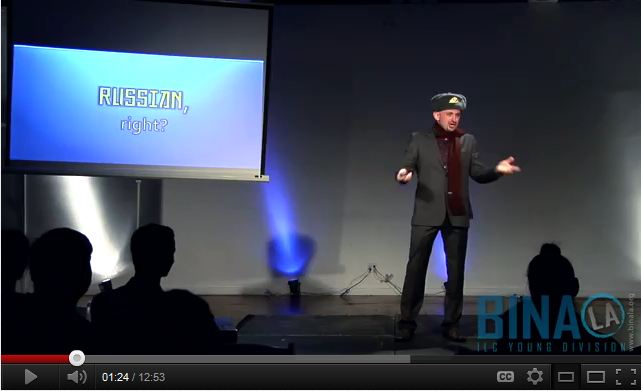 In the United States, the majority of Jews consider themselves Jewish by religion and their family’s country of origin (American / Israeli / Russian, etc.) their nationality. This is not the case for the Jews of the former Soviet Union — Jews who fought for their equality for over 100 years, helping to create one and to bring down two empires in the process, but losing most of their culture and religion along the way.

BINA is building an amazing community in Los Angeles that I am proud to be involved in.  You can find this and more talks on the BINA website.