Born in the former Soviet Union, Boris came to the United States at the age of 6. An award-winning writer and director, he earned BFA and Post-Graduate degrees in theatre before moving to New York, where he worked as an actor as well as producing and directing several theatrical productions. Upon moving to Los Angeles, Boris made the switch to film and television.   His first short film as writer/director: Unbreaking Up, screened at multiple festivals, winning an award for drama. His second short, "Purgatory, Inc.", is now going out to festivals. Boris is currently writing, directing and producing a feature-length docu/mocumentary Con Artists, now in post-production as well as "Cycles and Revolutions". As an actor, Boris has appeared on numerous TV shows and all levels of film from shorts to studio releases. More at: www.imdb.me/boris and www.matterdoor.com 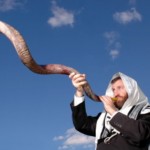 I’m very excited to say that my recent presentation for the Jewish Genealogical Society of Los Angeles, The Trotskys, the Bronsteins and the Kievskys: A Search for Identity in Russian-Jewish History, is now available on DVD.  If you are at all interested in Revolution-era Russian history or the history of the Jewish people under the Czar and the Soviet Union, I believe you will find this informative and entertaining.

The presentation focuses on the lives of the “Bronsteins” – the average Jew of the Russian Empire, the “Trotskys” – the more integrated / Russified Jews that created the revolution, and the “Kievskys” – the resulting mix of Trotsky and Bronstein that would become the Jews of the Soviet Union.   You can see a rough excerpt from the presentation in this previous post.

Many thanks to all of our donors who have helped us reach this point! While we are still working on the final product, as a special gift, if you have donated at the “Melamed” ($180) level or above and would like a free copy of this presentation, please send us an email and we’ll get one out to you.

In 1969, Prager served both the Israeli government and the Student Struggle for Soviet Jewry as courier/lecturer for Soviet dissidents. Now, he is a radio talk show host, columnist, author, and public speaker.  He is a Media Fellow at the Hoover Institution of Stanford University, has taught Jewish and Russian History at Brooklyn College, and was a Fellow at the Columbia University School of International and Public Affairs.

Dennis came to ILC to talk about a popular subject these days – speaking for the state of Israel. Not surprisingly, he was an eloquent and entertaining speaker.  Among the many interesting arguments he made, was that anti-Israel sentiment is ingrained in the media, and that the battle for perception is being lost on college campuses all over the world. A reason for this, he noted, was that “the Left” is always rooting for the underdog and somehow Israel, outgunned and outnumbered 22 arab countries to 1 Jewish state has come to be perceived as the top dog, shifting Leftist allegiance (many Jews included) toward the Palestinian cause.  Shocking as it may seem to some, many of the biggest proponents (propagandists?) of the malicious BDS movement are actually Jewish professors on college campuses.

The entire presentation was interesting, but two things surprised me about Dennis:

As you might imagine, this instantly sparked feelings of kindred spirits in me.  As soon as the presentation was over, I made my way to the crowd of people around him and waited with all the patience I could muster for my turn among those asking him questions. When that turn came, I handed him my business card and asked him to read the quote on the front: 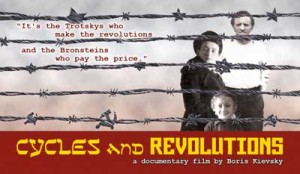 After chuckling and asking what it was all about, Dennis offered himself for an interview — an offer that I will surely be taking him up on in the very near future!

If you’d like to support this project please visit the support page to make a donation, and please pass along this site to others who may be interested.

Last month, I was invited to present before the Jewish Genealogical Society of Los Angeles.

My presentation was called: The Trotskys, the Bronsteins and the Kievskys: A Search for Identity in Russian-Jewish History. The talk focused on the lives of the “Bronsteins” – the average Jew of the Russian Empire, the “Trotskys” – the more integrated / Russified Jews that created the revolution, and the “Kievskys” – the resulting mix of Trotsky and Bronstein that would become the Jews of the Soviet Union.

Here, in the first of two excerpts from that evening, I explain the danger of what I call the Rus-holme Syndrome and why we may call ourselves Jews, ex-Soviet Jews, Russian Jews, Ukrainian Jews… but never “Russian.” 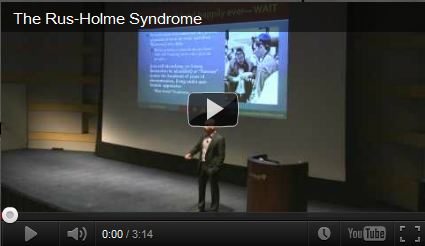 For an explanation of Alan Dershowitz’s (Tsuris) Theory of Survival, see the video here.

It was a pleasure to speak about the history of my family and the Jewish people to a group interested and dedicated to the topic.  Many of the members themselves are researching their own old-world roots, although their families largely came in the late 1800s and early 1900s, just as the pogroms and revolutionary movements were escalating. If you’re at all interested in your Jewish roots, I strongly encourage you to visit the JGSLA website, check out their resources and attend an event.

To donate and help support this project, visit our Support Page.

While almost every Jewish person in the world today can freely celebrate Hanukkah, 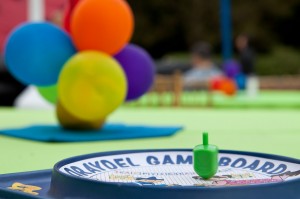 there are many who don’t.  With the Soviet Union now defeated, many of the Jews that came from there don’t celebrate this holiday or any other.  They have lost their connection to and do not take pride in their rich Jewish heritage.  They don’t know that it’s a holiday celebrating the victory of the Jewish people over the Greeks who were restricting their right to practice Judaism.  Not unlike the fight to leave the Soviet Union to be allowed to practice Judaism and live in freedom, this was a war that few thought we could win — a cycle that has repeated many times over the course of our history.

We want to thank everyone who has supported the film this year and has helped make this project possible. We continue to gather funds for post-production, and remain dedicated to finishing the film in the next few months. We are still accepting donations through the International Documentary Association, and appreciate you all spreading the word as much as you can. Every Facebook post and every tweet is one more chance to reach another person whose life might be affected by this film.

As always, stay updated on the film by checking out our Updates page, liking us on Facebook, and following us on twitter!

On Tuesday, December 13th, I will be presenting at a Taste of LimmudLA, hosted at the Workmen’s Circle.

I will be speaking on the specific history and cause of the Jewish participation in the Revolution, the ramifications of that participation, and how ex-Soviet Jewry can survive without the external pressures of the Soviet Union.  This is a particularly exciting opportunity for me, because unlike the previous 15-minute or less time slots I’ve had the chance to present in, I will have 40 minutes to present and still have time for a Q&A.  This means more depth to the presentation, more multimedia and I can finally speak slower!

I am also thrilled to be sharing the evening, called “Boris Squared” with Boris Dolin, a specialist in military strategy, national security management, and international relations, offering a presentation entitled “A Day of Hope and Tears: Israel’s Story of Independence.”  I had the pleasure of befriending Boris during a recent trip to Israel.  He’s incredibly knowledgeable in history, diplomacy, current Israeli politics, and a captivating speaker.  Boris recently founded the organization Telem — an exciting young movement in Isreali diplomacy.

If you’re not familiar with it, LimmudLA is a volunteer run organization dedicated building community, fostering learning, and creating exciting opportunities for Jews of all ages.

I hope to see you at what will surely be a fascinating evening.
Please RSVP to Jodie at LimmudLA

One of the wonderful by-products of working on this project has been that as people learn about the work being done and the goal of this documentary, I have been getting invitations to speak about it at events around Los Angeles.  The first was the presentation at BINA in July, which I was thrilled to reprise recently at a benefit for Cycles and Revolutions hosted by the Ru-Ju-LA group which featured the film Refusenik and filmmaker Laura Bialis.  With several more in the works, these engagements offer a personal outreach to the greater community and hopefully help bridge the gap between ex-Soviet and American Jewry.

On December 4th, I will be speaking at the Jewish Federation of Greater Los Angeles’s “Imagining Our Future” event, an opportunity I couldn’t be more excited about. Described as “A Day of Jewish Learning and Culture,” during which, rabbis, artists, and performers will be giving their interpretations on our Jewish life and future.

As part of a block called “A Future Big Enough for All of Us,” I have been invited to present on the integration of Soviet Jews into the greater American Jewish community.  Using information I’ve learned and videos I’ve generated for Cycles and Revolutions, I’ll discuss the specific challenges facing Russian-speaking Jews in the U.S., and how we can better integrate into larger communities without losing our culture and identity.

Thanks to an anonymous donor, admission is FREE (and includes lunch!).  I hope you’ll come learn, discuss and participate!  If you’re going, please let me know and say “hi!”