My grandfather, Moisei (“Misha”), lived in Palestine from the ages of 11–13. In 1916, he left for America, but couldn’t make it and decided to return to Ukraine, the country of his birth. Upon arriving, he found himself at the beginning of a revolution.

For Misha, the Russian Revolution promised the chance of carving a new cultural identity, a hope for escaping the constraints placed on the Jewish people by the Russian empire.  My grandfather fought for that hope in Russia, and suffered for it.  Despite his efforts, my Soviet birth certificate still declares my nationality not as “Ukrainian”, not as “Russian” or “USSR / Soviet” but as “Jewish.”

For his trouble, Misha was imprisoned by the people he helped put in power, kept helpless as his first family was all but wiped out by the Nazis and his second family was forced to relocate to remote Siberia. Even after finally receiving amnesty for the crime of supporting the revolution, he was not allowed to leave the country that had betrayed him.  Disillusioned with the promise of a Communist Russia, Misha dreamed of returning to his one-time home of Palestine, which had recently become the Jewish nation of Israel. 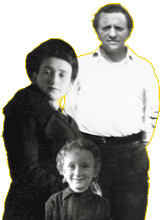 grandfather had passed, we finally got permission to leave the Soviet Union, but rather than Israel – as the exit visa states and as his father had dreamed – my father chose to take us to the United States, to pursue a better life for his family.  None of us has been back in over 30 years.

Now, almost a century after his father joined a revolution and paid the price, the cycle has come around again, and my father, despite having achieved the American dream, still does not feel completely at home. He wants to relocate to Israel and help other ex-Soviet Jews do the same. While less revolutionary, my father has found his own solution to the same problem his father faced. Both men felt that their people did not have a true home in the world and were moved to action.

Now, I am returning to Ukraine for the first time, to the place I called home as a child.  Together with my father, we will retrace the journey to the part of Siberia where he lived as a child, and one part of the cycle will be complete.

Plotting a set of points that reaches back through me, to my father, grandfather and great grandfather, then extends from me into the future, I hope to better understand my present place in the world and a direction for the future.