Two years after leaving Palestine, my grandfather returned to Ukraine and made a decision that would shape the rest of his life.

In 1918, my grandfather became a Bolshevik.

He soon became friends with Leon Trotsky–a fellow Ukrainian secular Jew – and rose to the rank of “Politruk”, a political commissar in the Red Army.  When Trotsky was sent into exile, my grandfather went to the train station to see him off.

In 1937, Stalin’s NKVD took Misha from his family in Kiev and sent him to a Siberian gulag on charges of counter-revolutionary activity (a standard charge made against anyone thought to disagree with Stalin, especially associates of Trotsky).

Although released in 1942, he was forced to stay in Siberia through the end of World War II. It was during this time that the Nazis captured Kiev and exterminated 33,771 Jews at Babiy Yar, Misha’s wife and her parents among them. Learning of the massacre, his son voluntarily enlisted in the army to avenge his mother. He died on the front. 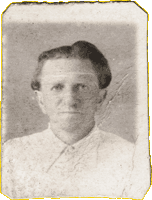 After the war, having served his sentence but not deemed rehabilitated, my grandfather was not allowed to return to Kiev, where his daughter–the last surviving member of his immediate family–lived.  In an effort to stay near her, he came to Cherkassy, a town some 150km down the Dnieper River.  He rented a spare room from a relative of Golda “Olya” Shleifman.  They were introduced a few days later and within two weeks of their first meeting were wed by her uncle, an orthodox-rabbi, in a Jewish ceremony under a hoopa.  Nine months later they had a child, Elya, my father, whom they habitually called Alik (at his own request) in order to make him seem less conspicuously Jewish to others.

All was well for 8 months, until the newlywed couple sensed they were being followed.  My grandfather was soon re-arrested, jailed, tried by a tribunal and re-sentenced for “the old crimes” to life in remote Siberia, deep in the forest of the Taiga.

But his family would soon join him.