Although the Jewish people made up a tiny fraction — never more than 5% — of Russia’s population, the Bolshevik message of national equality helped draw a disproportionate number of Jews to the party’s Central Committee. Of the twelve members that planned the takeover, six were Jewish. Of the seven man “Political Bureau” overseeing the October Revolution, four were Jewish, and of the 18 men in the “Military Revolutionary Committee” tasked with actually seizing power, fully 1/3 were Jewish. The five man “Revolutionary Military Center” serving as the party’s operational command included two Jews, and in Ukraine, the Cheka (the Bolshevik secret police), was nearly 80% Jewish. 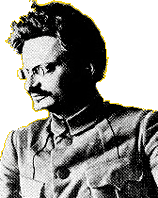 The Jewish people of the Russian Empire were instrumental in making the Bolshevik Revolution possible, and once in power, were poised to exert their influence over most of the government.

Although most of them used noms de guerre that were decidedly not Jewish, when the chaotic nation was looking for a scapegoat, these revolutionaries were no different from the rest of the Jews.  They were all still Bronsteins.