Zev Yaroslavsky has never been shy. On a night in 1971, he and his associates rented 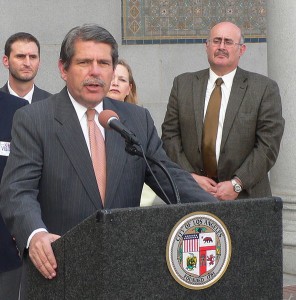 a motorboat and crossed the LA Harbor, then used toilet plungers to attach their vessel to a Soviet freighter so they could send a message to the Kremlin in spraypaint: “Let Jews Go”.

This week we have scheduled an interview with LA County Supervisor Zev Yaroslavsky. As a Supervisor, Yuraslavsky has been reelected 3 times, and before that he was a member of the LA City Council, to which he was elected 6 times. Having spent more than half of his life in elected office, Yaroslavsky preceded his political career with political activism, playing a leading role in the movement to free Soviet Jewry by organizing protests, pickets, marches, and occasionally renting boats. While Zev often credits his career in politics on his involvement in the Soviet Jewry movement, he rarely discusses his personal motivations and what he might consider costs and rewards for his often controversial path.

We are very excited for this interview. Mr. Yaroslavsky’s voice will undoubtedly add greatly to the greater story of this film.