Question: What do you call a Jewish poet, writer, intellectual, Stalin loyalist and KGB informer?
Answer: A Jew.

Earlier this month, New York’s Center for Jewish History hosted the annual commemoration of the Night of the Murdered Poets. As Nahma Sandrow of Jewish Ideas Daily writes:

On August 12, 1952, thirteen major Soviet Jewish figures were executed for espionage, bourgeois nationalism, “lack of true Soviet spirit,” and treason, including a plot to hand the Crimea over to American and Zionist imperialists. 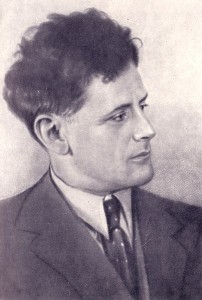 Recently, Gennady Estraikh (whom I interviewed for this documentary) and Boris Sandler have compiled a new lexicon of over 400 writers silenced in Soviet Russia, finishing the work that poet Chaim Baider spent two decades beginning and giving ex-Soviet Jewry something to celebrate on the anniversary of this terrible day.

Among those executed were writers/poets Itsik Fefer, David Bergelson, and Peretz Markish, whose deaths helped lend the night its name. The date holds heavy significance in the history of Soviet Jewish oppression, beginning some of the worst times for Soviet Jewry, stemming from the 5 Year Plan and the Great Purges, and leading into the so called “Doctor’s Plot.”

A lesson of that night that may be easily overlooked is the equality of all Jews when it came to persecution under Stalin.  Itsik Fefer was not just a Jewish writer and poet, he is also widely known to have been an informant for the KGB.  Fefer was sent by the Soviets to accompany (read: inform on) Solomon Mikhoels, director and lead actor of the State Yiddish Theatre, on his trip around the world as head of the Jewish Anti-Fascist Committee.  Mikhoels was killed in 1948 in a precursor of things to come.  Fefer may have been trying to curry favor with Stalin, protect his own interests, or may have actually believed in the ideology of the state as so many did.  Regardless of his motivations, when it came down to it, Fefer was still a Jew, still an intellectual, still a threat to Stalin’s attempt to control the minds of the populace, and still subject to extermination.

On a personal side note, when I was in college, I chanced upon a class by a visiting professor from Zurich who taught a course in Russian Jewish Literature.  The visiting professor was Simon Markish.  I’m embarrassed to admit that it wasn’t until nearly 15 years later — after I started working on this documentary — that I learned who he was, and who his father, Peretz Markish was.  By then, unfortunately, Professor Markish had passed away.  MY embarrassment aside, I am grateful to him for introducing me to Russian Jewish literature and the desire to learn more — a desire that has evolved into and interwoven with my interests and pursuits today.

Learn more about the Night of the Murdered Poets on wikipedia and the new compilation here.