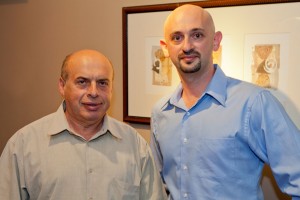 Thanks to help from several individuals who championed my cause, I finally had the chance to interview Natan Sharansky, former refusenik and current Executive Chair of the Jewish Agency For Israel.  While there were many things I wanted to ask him, we focused on the current situation that ex-Soviet Jews are facing in the U.S. and around the world.

Natan Sharansky became a poster child for the movement to free Soviet Jewry after his application for emigration led to a 13 year prison sentence and a 9 year imprisonment in a gulag. Upon his release, he committed himself to ensuring the survival of the Jewish people and the Jewish state of Israel. He has served in the Israeli Knesset, published three bestselling books, and received both the Congressional Medal of Honor and the Presidential Medal of Freedom.

As this documentary started with my own search for identity as an ex-Soviet Jew in the U.S. and Natan’s latest book is called

“Defending Identity“, our interview focused largely on the topics of identity and nationality: both how they relate to each other and to the current ex-Soviet Jewish condition. Sharansky echoed my own fears that assimilation is of of the greatest threats currently facing us, noting the staggering number of Jews lost every day to assimilation and that lack of strong identity is part of the problem.  Natan believes that identity, of which nationality is a part, is more than just a label; it is a historical link and a purpose greater than the self.  He cites his discovery of identity as key to his survival and resistance in the Russian penal system.

No Responses to “Natan Sharansky – Identity and Assimilation”